Zoe had an exhausting gym class today! She took the pacer test...
The test involves running continuously between two points that are 20 m apart from side to side. These runs are synchronized with a pre-recorded audio tape, CD or laptop software, which plays beeps at set intervals. As the test proceeds, the interval between each successive beep reduces, forcing the athlete to increase their speed over the course of the test, until it is impossible to keep in sync with the recording (or, in rare occasions, if the athlete completes the test). Many people who test people using the Multi-stage fitness test allow one level to beep before the person makes the line, but if the person being tested does not make the next interval then the most recent level they completed is their final score. The recording is typically structured into 21 'levels', each of which lasts around 62 seconds. Usually, the interval of beeps is calculated as requiring a speed at the start of 8.5 km/h, increasing by 0.5 km/h with each level thereafter. The progression from one level to the next is signaled by 3 rapid beeps. The highest level attained before failing to keep up is recorded as the score for that test.It gets faster every level of the test.
Zoe ran 42 laps. The other girls in her class ran around 20 laps or less. Zoe has the record so far for the girls! When she stopped, there was only 1 boy running with her. Aaron stopped at lap 43. He was determined not to be beaten by a girl! Another boy in Zoe's class, who ran in a different group ran 70+ laps! Mrs. Frost stopped him because it was time for a different group to do the test. I'm exhausted just thinking about all this running!

The kids had a great time sledding after school today! 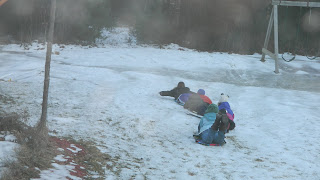 The top layer of snow is icy, so the sleds fly down the hill! I stood at the bottom of the hill earlier in the day to stop Noah from sliding into the trees. He had so much fun flying down the hill! Kate was more cautious and she would stop herself before reaching the bottom of the hill. Noah on the other hand wanted to go fast all the way down and he didn't care if he landed in the trees. I cared, though.
Posted by Unknown at 9:05 PM