Last night I forgot to mention Kate's computer time. She was so happy to be able to push all the keys on the keyboard and she even found the monitor button to turn the monitor on and off. I was just waiting for her to push a button that would lock us out of our computer or something, but no apparent damage has been done that we know of. It was just so funny to see her so happy to play on the computer like the rest of us do on a regular basis. Now she tries to push the buttons on the keyboard when we are on the computer and she gets very upset when we won't let her. 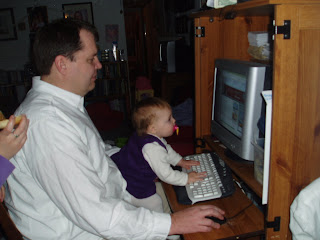 Writing about Kate's computer play reminded me of Zach the other night who was playing on the computer when Matt got home from work. We sat down at the table for dinner and told Zach it was time to get off the computer, but he didn't want to. Matt went over to the computer and clicked on the x to close the program Zach was playing on and Matt sat back down at the table. Zach clicked on the start button, found internet explorer, and went back to play on Nick jr. which is the homepage. This surprised Matt, so Matt got up and shut the monitor off and sat back down. Zach turned the monitor back on and started to play. Finally Matt shut the program off and logged off, so Zach was stuck because he doesn't know the password to get back on, but it was funny when Matt said, "He doesn't know the password too does he?"

I also wanted to mention on Friday Eleanor's interest in watching me make macaroni and cheese. She watched the entire process from boiling the water to adding the cheese and was quite interested. She was even excited about having some macaroni and cheese after it was made, but changed her mind soon after because she really doesn't like it. However Zach loves it and eats it every chance he gets. It was fun to show Eleanor all the steps to making Zach's favorite meal.

And I haven't mentioned Zoe's awesome basketball skills that she showed off Saturday during her game which she played with girls and boys. I didn't get to watch her since I was on my way to the temple, but my Dad was there and he was very impressed. Zoe knows a lot of the boys from school, so they were passing to Zoe and Zoe was passing to them. She got a rebound and positioned herself so she could make a shot and made a basket! The parents in the crowd were talking about how good she is and they enjoyed watching her (which has also happened in the past). She is a basketball player and I'm looking forward to watching her play throughout the years.
Emily played well in her game too. She is becoming more confident the more she plays and her dribbling has improved since last year. She is more comfortable with her coach this year and practicing and she's not afraid to get on the court to practice dribbling and shooting before her practice or before Zoe's practice. She almost didn't play basketball this year, but I'm glad she changed her mind because I think she is enjoying it more this year than she did last year.
Zoe and Emily had double practices on Saturday because they are finishing up their session in Orland and their Bucksport program started, so they are overlapping for a few weeks. Usually the Bucksport practices are during the week after school, but this year they are on Saturday. Which actually works out better for me because I don't have a car during the week. The girls are going to miss their practices this Saturday because we have a Primary activity, so they only had to endure one Saturday of double practices.

Kate usually says "Oh" for "uh oh", but this morning she said "uh oh" and Emily said, "Oh my gosh! She said her 1st word!" It was cute how excited Emily was for Kate.

Kate waved goodbye to Matt this morning for the first time and then she leaned toward him and said "mmmmm" for a kiss. It was a morning of firsts for Kate. :-)

After telling the girls to make their beds this morning Zoe claimed that she sleeps better when her bed is not made. That girl will do and say just about anything to get out of work. It's funny when she gets Emily to be Cinderella and Zoe is the wicked step-mother. Of course Cinderella does all of the work. It's funny that Emily goes along with it. Tonight when Matt told the girls to clean up, which means put away the toys that are in the living room and bedroom, Zoe asked me, "What if I don't clean up?" I told her she would be doing the dishes after dinner, which got her cleaning up. I hope she can afford a maid when she grows up because she is going to need one!

Zoe and I just got back from Target to buy a birthday present for her friend. We had fun looking around. The summer items are out, so we looked at all the fun outdoor toys that we could buy. They had a Dora bat and ball set that I think Eleanor would like for her birthday. Zoe and Emily have never showed an interest in softball, but Eleanor loves to have me throw her the ball so she can hit it. We lost our bat and ball last summer, so it would be fun to get her a new set. But it would also be nice to have a t-ball set so she could put the ball on the stand herself and hit it...less work for me. :-) Okay after reading that sentence, maybe Zoe takes after ME in getting out of work when she can. I guess I can't judge her too harshly.
Posted by Unknown at 12:26 AM

It's always fun the hear the happenings. That's exciting that Zoe is so good at basketball! That is fun for her. Kate and Zach are growing up fast!

I wish we could go back to how life was without the computer...but then I would miss blogging!

So hard to keep the kids off without being a meanie!

Yay for Kate and her firsts!

Yeah for Kate getting her computer time:) That is really a cute picture of her and Matt. That is great that the girls are doing well with their basketball. I think it is great for each child to have something they can excel at.

I think Rose's first word was uh oh too...so dang cute! I love it when they start to talk. (especially when they learn NO). :) That is great that Zoe loves basketball. My girls don't like mac and cheese either, they used to???? Weird.