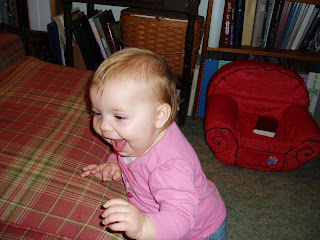 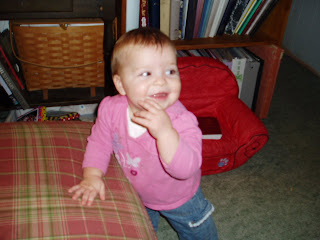 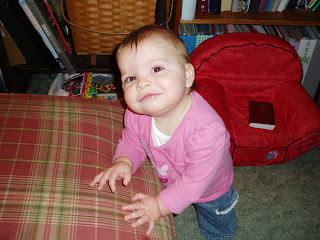 You're showing signs already of being a computer addict like the rest of us. :-) 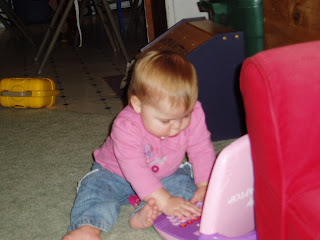 You snuck into our family and I'm glad you did. When I was pregnant with Eleanor I had a strong feeling that she was going to be our last girl and then we would have 2 boys and be done. I even had a woman comment to me after Eleanor was born and I was pregnant with Zach that it was so nice that I had 3 girls and it was time to have 2 boys. Weird...how did she know? So, I wasn't surprised when we found out that Zach was a boy because that was the plan. But when I was pregnant with you, I started to think about a girl and that just baffled me because you were going to be our last boy, so who was this girl I kept thinking of. I've liked the name Kate for awhile now, so I secretly decided you would be named Kate if you turned out to be a girl...which you did! I must admit that I was a bit disappointed that our plan had been thwarted, but I got over it quickly...unlike your father, who has always had a hard time adjusting to the words, "It's a girl!". It was weird to start looking at pink again after adjusting to blue with Zach, but it was fun! Girls are so much fun to shop for. Daddy wasn't as set on the name Kate as I was, so we started thinking of other names and before long it was decided that you would be Madison (so if you come across writings about a baby Madison, it's really talking about you), but as it got closer to the time you would be born, Daddy informed me that he had never ruled out Kate (which was news to me), so of course from then on I wanted to name you Kate, but we had told so many people that you were going to be Madison, but in the end that didn't matter and you became Kate Mackenzie Erickson (and I'll admit that I have a hard time spelling Mackenzie and I really have to think about it before I spell it).

You were a challenging baby, but from the time you could crawl and get around, you made a very welcoming switch and have been a delight ever since. You transitioned to sleeping through the night pretty quickly a few months ago, which was so nice of you. Your finally getting your top teeth, so now you have 4 teeth with more on the way, which has made you a little more cranky than usual, but we understand. You wave goodbye at times and seem to do it more enthusiastically for your Grampie. Just like you took a step for him while I was gone the other day. But you made up for that last night by taking 4-5 steps over and over again. You'll be walking before we know it. Grammie & I thought you would be walking by now since you have been cruising for awhile now, but why walk when crawling is so much faster! You say "ow" for meow and "oh" for uh oh when you drop something. You have discovered the fun of balls and you love to put toys inside a bucket and take them out over and over again. You learn many new things every day as you watch your siblings and copy them.

No, you are not a boy, you are a delightful little girl who we love very much. Happy Birthday!
Posted by Unknown at 1:20 PM

Happy Birthday to Kate! Can you believe your baby is one already? Ella turned one on the 1st and I think she had a grand ole time eating her cake. Hope Kate has an awesome day!

Happy Birthday Kate! Girls are so sweet. I hope it is a wonderful day!