I watched all of "The Sisterhood of the Traveling Pants" last night and enjoyed it so much. I was happy to discover that this movie was based on a book that is the first of a series and I look forward to reading the series.

Zoe & Emily had a half day of school today and now they are on vacation until the 25th. It got a bit chaotic around here at about 12:30 when the girls and Jenn's son, Hayden walked through the door. Jenn arrived before Hayden got his coat, snow pants, or boots off, so he left and I talked with Jenn for a minute. She gave me this very fitting plaque to hang up on my wall. I love it! 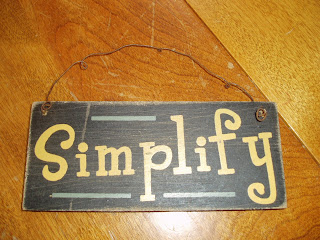 Zoe had checked the mail for me and Eleanor was quite anxious to open the Netflix movie that I told her was coming today, "Dora: Shy Rainbow" My Mom called and while I was talking with her Zoe asked to open the package from Matt's parents (which may have arrived yesterday, but we didn't check the mail), so she did and discovered that there was a card for Matt & I and a card for each child...very exciting, which created a lot of noise, shouts of joy as they discovered money, counted the money, and wanted to show me the money. Zach hands over $2 to me and keeps $1 for himself. I keep a close eye on him to make sure he doesn't lose it, which isn't hard since he has plopped himself down in front of the tv to watch Dora. Then poor Jenn comes to the door and tells me that her van is stuck in our driveway, she'll be back later with her husband to get it. I'm still on the phone with my Mom, Eleanor has abandoned her job to feed Kate, so Kate helps herself. 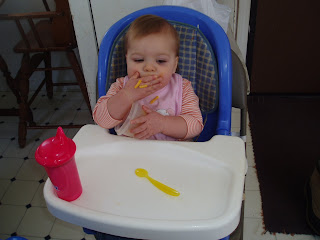 She would love to be able to use that spoon sitting on her tray, but the coordination is just not there yet.
I think about the e-card I was working on before the kids arrived and wonder when I will get back to the computer. A little while later things calmed down and I was able to finish my to-do list of things I wanted to look at/do on the computer. I had to make a list because I often get on the computer and get side tracked or I forget half the things I wanted to do. I looked over at Kate who was sitting in the chair next to the computer and had to stop to take pictures of her play because it was so cute. She was playing with a Littlest Pet Shop game. First she would push the buttons to make sounds. 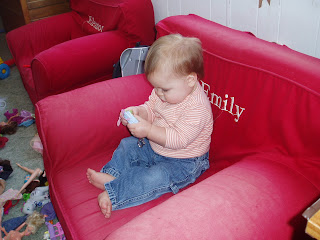 And then she would put it to her ear like a telephone to talk. 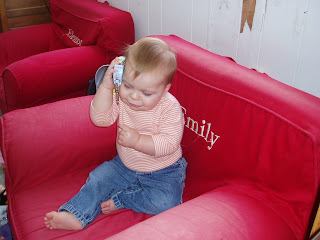 Jenn and her husband came back over to get their van unstuck. I felt so bad because Jenn's husband was about to leave for the weekend with some friends and he was spending his goodbye time with Jenn in our driveway getting their van unstuck. Ugh.

Eleanor asked me several times this evening for a tuna fish sandwich(as I was getting everyone what they wanted for dinner). She kept asking, so I finally said, "I KNOW you want tuna fish." And she replied, "No, tuna fish on a SANDWICH." Got it.

And with all of this going on I have been getting ready to go to the temple tomorrow with my Mom and 3 other ladies from church. We'll be heading to the Boston temple in the morning, a 4 hour drive to get there, spend 5-6 hours there, and then travel 4 hours back. We'll leave our meeting place at 6:30am. I've been looking forward to tomorrow since it has been over a year since my last trip to the temple. So everyone, wish Matt good luck tomorrow with the kiddos. :-) My plan of going to bed at 8:00 this evening since I went to bed late last night has not been realized. It is now 10:08. Good night!
Posted by Unknown at 1:09 AM

Wow! That's a busy afternoon. I hope you have a great temple day tomorrow. Why are the kids out of school until the 25th? do they also have spring break? Have a good weekend!

The traveling pants books are cute. Did you know that they are making a second movie? I thought the movie was really cute. Sounds like you had quite the day... you need a day to relax!!

I just loved that movie too....I didn't know that it was a book series, will have to get it! Those pics of Kate are so cute with her "phone". Fun Fun Fun.

I'm so ready for winter to be over!!

Hope you had a wonderful time, and enjoyed the peace and quiet:)

Best of luck with your break-I'll be thinking of you!

I love those chairs with your kids' names on them-too cute.

And the picture of Kate holding the game up to her ear like a telephone-Pedro does the same thing. :)

I hope you had a great day at the temple-I am going this week when I go to Houston for the first time in 7 months-yay!

cute, cute, Kate pictures! I have read that series of books. I thought they were a fun read.

Joey - you make me realize that I should be more appreciative of a temple that is only 40 minutes away! What an effort you have to make to go! I am sure that you had a wonderful time. I have been trying to go more often & it does fill your soul & provide a peace unlike anything else.