I forgot to show you these pictures of Zach yesterday. While I was preparing dinner, Zach entertained himself in the bathroom. First he wet and combed his hair. 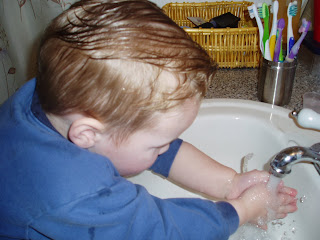 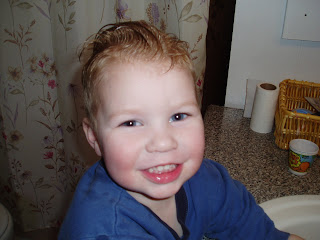 When I went back into the bathroom to check on him he was washing his hands. He was having lots of fun playing with the soap bubbles. After rinsing off his hands and making sure the soap bubbles were gone, I went back to preparing dinner while he brushed his teeth. Do you think he'll be this cleanly when he's older?

I can't believe I forgot to mention Eleanor's tortilla experience. We frequently make chicken fajitas for dinner because Matt & I love them, but the majority of the kids would rather die than eat them. Last night we told them that they each had to eat one little piece of a cheese tortilla before they could have the treat during Family Home Evening. Emily, Zach, & Kate had no problem with this, but Zoe & Eleanor acted like it was the end of the world as they knew it. Zoe claimed she would throw up if she ate it and Eleanor tried a tiny bite and screamed "I hate it, I hate it" over and over again. Eleanor was in tears and refused to eat it and eventually left the table very upset. Zoe eventually ate her piece, but not before trying to trick us into thinking she ate it, but really didn't. I got a kick out of Matt's comment to me that in the future when we are at Zoe's home for Thanksgiving dinner, he is going to throw a fit like Zoe and claim he will throw up if he has to eat the dinner. I actually look forward to that day. :-) We saved Eleanor's uneaten piece of cheese tortilla to offer to her later after the song, prayer, lesson, scripture, and game. It was her second chance at getting ice cream for the treat. She was encouraged for awhile by our chanting "Eat it, eat it!" and claimed at one point to actually LIKE it, but as soon as our chanting and cheering stopped, she wasn't so sure about liking it anymore. She was taking very tiny bites, so Matt tore the piece in half and encouraged her to stick a half piece in her mouth. She did and she drank some water to go with it and then she wouldn't swallow it. She ended up spitting it out and she went back to eating tiny pieces from the other half, which I told her if she ate that half then she could have her ice cream. She finally got her ice cream, but it was a painful experience for all of us!

We were discussing baby names this morning and Eleanor kept calling Taco Bill..."Huckle Bill." She loved all the silly names that Matt came up with like "Soft Taco Supreme". With every name he mentioned Eleanor would yell, "Yeah!" with lots of excitement. I'm glad Eleanor is not naming this baby.

Eleanor & Zach have opposite reactions to a dog. Eleanor LOVES dogs and wants to pet them and doesn't care if they maul her. Zach wants nothing to do them and stands frozen until the dog is out of sight. This exact scene happened this morning as a lady walked by with her dog as we were walking to the mailbox. Eleanor got all excited to see the dog and Zach stopped dead in his tracks and wouldn't move until the dog passed.

Zach has been going outside to play about once a day the last few days. He doesn't mind going out by himself and he'll stay out there for 10-20 minutes and then come back inside. Eleanor stayed out with him for 5 minutes after walking to the mailbox, but somehow her boot came off during their play and she didn't have any socks on, so she came into the house with one very cold bare foot. I looked out and Zach was carrying her boot to the house. I have no idea what happened and neither does Eleanor, but I know she was not happy about the experience!

I read Emily's Fish book to Eleanor & Zach today, which went well until we read about the eel. The eye of the eel WAS scary looking and it really freaked Zach out. I tried reading about the other fish after the eel, but Zach kept saying to skip it, so we stopped reading the book and moved on to a Dr. Seuss book.

Zach's new pastime is to take hats and mittens out of the hat & mitten box and fling them over his shoulder. He finds it quite amusing.
Posted by Unknown at 1:04 AM

I thought from your heading that it was going to be a post about having to sit through dinner with the kids, which at my house can be torture sometimes with all the complaining and bickering that seems to occur in the evening!

Funny that they don't like quesadillas, I thought everyone liked those!

Cute Zach pictures! Nicolette actually loves to play in the sink. If she is ever too upset I know I can stick her in front of the sink to play in the water. Not very mother/earth friendly but...ya gottta do what ya gotta do sometimes;) I am sorry about the dinner torture. Dinner can be such a trying time. We have a dinner motto "no negativity" I don't want to hear about it after I have done the work to make it! This doesn't always work but... I try:)

What a cutie! My son is always playing in the sink. Ahh, the dinner wars-we have them all the time. Do they ever grow out of the picky eating stage?

That Zach is one cute kid! I really am perplexed at what could be so horrible about a tortilla! Silly kids!