When Zoe & I went shopping last night, she "bought" (she still owes me $1 and so does Emily) a nail art kit and we decided to pick one up for Emily too. First thing this morning they were asking for help to put on their nails. Of course the nails didn't stay on for long, but we did manage to get a picture of their "fun, but hard to do anything with these on" nails. Emily's hand is on the left and Zoe's hand is on the right. 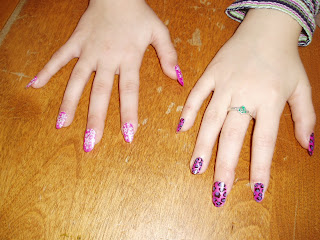 It was a nice day out today, so the kids spent some time outside this morning. They picked a good time to go out because Kate was sleeping, so it was extra quiet while they were out and Kate was able to sleep in peace.

Zoe & Emily worked on their math-a-thon books today. Participating in this program to raise money for the St. Jude Children's Research Hospital has become a February vacation tradition for Zoe and now for Emily too. When they were getting bored later on this morning I suggested they work on their books (thinking they would say no) and they thought it was a great idea. They both finished their books today, so now we just need to collect money (which involves having my Mom take the pledge sheets to work, and once again I have waited until the last minute to give her the sheets and now she only has a few days to collect the money...sorry Mom!).

Movie gallery called today to let me know that I have a free rental waiting for me. It is so nice of them to give me a free rental every month for not renting videos at their store anymore. I never pass up their free rentals, so I welcome the phone call every month.

We went the entire day today (until now) without turning the computer on! Every time the kids asked to get on the computer I told them they could as soon as the living room and their bedroom were clean. And every time they decided to do something else instead. It was nice to have a computer-free day, but I was exhausted by the time Matt got home!

Zach was acting like a boy during lunch today. He was blowing raspberries with his mouth and trying to spit on the girls. He thought it was hilarious and of course the rest of us found it annoying.

Kate stood on her own quite a bit today. But whenever Zach saw her, he would rush over to her and insist she walk with him. And every time Kate saw Zach coming toward her, she would plop down on her bottom and whine.

Zoe went to her first school friend birthday party by herself this afternoon. They jumped on her friend's trampoline a lot, ate pizza and cake & ice cream, and had lots of fun.

I think we have received another tithing blessing. I paid off a credit card several months ago and then closed the account, but I received several more bills with interest payments owed. This bill has been on my list of things to pay, but we haven't had extra money to pay it, so it hasn't been a priority. Last month our balance was $61.35. The bill I received today says that our balance is now $0, which is weird because I didn't make a payment and neither did Matt. This may be another case where we are considered a lost cause and they just decided to write off the account or something. I'm not disputing it! I have felt that this is going to be a good financial year for us. Having these bills disappear is definitely helping. :-)
Posted by Unknown at 12:05 AM

It sounds like a fun day! That's funny about the computer, I use that tactic too. Sometimes it's a real pain that my kids are so distract-able, other times it's awesome!

I like the clean it up tactic...before computer play. I have not used that enough so far in my mothering life-time. The nails look very fun. you are a fun mom!

Love the nails! I have never heard of this math a thon-I think I need to check it out. I enjoyed reading your blog. By the way, I'm from NH.

Wow you guys are really busy!!!! That is a good way to get the kids to clean, any good ideas for a three year old???? She always seems to be "too tired" to pick up! Wow I hope some of our bills will zero out! you guys are lucky.