It has been suggested that we come up with a K name for our baby boy since we have 2 Z names, 2 E names, and 1 K name. Zoe is all for a K name, but we have yet to come up with one that we like and I'm not determined that it be a K name. I think I'm procrastinating naming this baby because we never finalize the name until right before the birth anyway and it will give me something to think about those 10 days or so that I am overdue and wondering if the baby will ever decide to come out. So out of curiosity, what boy names do you love?

It snowed through the night last night, but had stopped early this morning, so the kids had a one hour delay instead of a snow day (which we were anticipating). Usually Matt waits for the bus with the girls in the morning and then heads to work, but since the bus came an hour later and Matt had left for work, I waited with the girls. They entertained themselves by sliding down a snowbank on their bottoms. I have noticed Spring-like weather on several blogs out there, but it will be a few more months before those posts appear here.

I have set a goal to have Kate walk everyday while holding onto my hands. Maybe this will help her to want to do it on her own. I used to walk all.the.time with Zoe because Zoe insisted. We called it her "big belly walk" because she would stick her belly way out when she walked.

I finished putting together my 2006 blog book today. Now I want to double check with my on-line blog posts to make sure I have them all printed out. I know I'm missing the ending to several posts, so I need to print those out as well.

Eleanor printed out this mask (she called them glasses) to color and then I cut them out for her. She was quite proud of them. 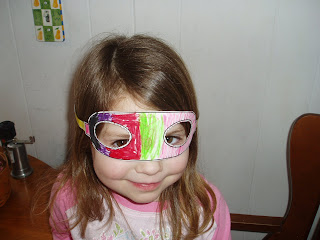 I set a goal at the beginning of the school year to work with Eleanor each day to help her learn her letters, numbers, and other things. I printed off a letter each day for us to color at first, but I think that lasted until we got to the letter D, so 4 days. Eleanor has little desire to sit down and do paperwork and life is busy, so the goal was soon neglected. After Eleanor printed out her glasses and colored them, I dug out a folder that has other paperwork activities and asked her if she wanted to pick one to do. She picked a feelings sheet where she had to determine whether the child in the picture was doing something that made him/her happy or sad and circle the face that showed that emotion. She had fun doing the activity and I think she would be willing to do more if I leave the papers out where she can see them. I used to have a preschool activity book for Emily and I'm thinking we should buy one for Eleanor. I think she would enjoy having a book of her own to work in and I wouldn't have to take the time to search the internet for new worksheets.

The kids went outside to play in the snow this afternoon after homework and chores were done. The boys from next door came over to play and the kids had a great time together. It ended on a sour note for Zach though as he had either taken off his mittens or they came off and his hands hurt from being so cold. I went out to get him as he was crying and we put his hands under cold water when we got inside until they felt better. He was so upset and he couldn't understand why his hands felt the way they did. It was so sad. During this crises, I was making a few grilled cheese sandwiches and getting ready to leave for Branch Council. My Mom arrived about the time that Zach's hands were feeling better and I left him and the other kids in her care. My Dad has a new calling as the High Priest Group Leader and counselor to the Elders Quorum, not to be confused with a counselor in the Elders Quorum since he is a Hight Priest, but he will assist the Elders Quorum like a counselor. Anyway, he was going to the meeting as well so I rode to church with him. It took a few tries to get out of our driveway, but we eventually made it out and were on our way...in snow showers that were becoming quite heavy on our way home. I checked the weather.com site and it says we have a chance of snow showers until noon tomorrow. It looks like I'll be checking for a school cancellation in the morning before waking up the girls.
Posted by Unknown at 12:53 AM

The only boy names I can think of that begin with K are Keith and Kevin... I'm sure there are more?

You are such a good mom, always setting goals and thinking about what each of your child needs or would like. I love Eleanor's glasses!

Naming your children is a hard thing to do. My kids ask me all the time why we named them what we did. I always get why didn't you name this that name!! It is frustrating!!! Maybe when they are parents they will realize how hard it is especially when your husband hates all the names you like!! Good luck!

Poor Zach with the cold hands problem! I am glad he was happier by the time your mom got there. I don't know on the K name...I could think of Kevin but, Kris already thought of that one. How about Kyle? The only K names I can think of sound very 80's...good luck:) I hope you will get a break from the snow soon.

boy names are so hard. I think we finally decided on Joseph Michael, but man it was difficult. I usually know the name before I even get pregnant! Rose gets that cold hands problem, and holds them out to me and just cries. I sure wish she would leave the mittens on. Both of the girls tear the mittens and hat off the minute they are outside! Good luck on the name thing....it is so hard! What about any family K names....get out the genealogy!

I'm partial to Kevin, of course. And I like Kyle.

I think that is great, too, you have individual goals for each of your kids!

Good luck with the names. Boy names that start with K that I can think of are:
Kyle
Kevin
Keenan
Kelton
Keegan
Kade
Kaden