Zoe had a stomach ache last night and this morning, so she stayed home from school. She wanted me to play cards with her this morning, so I taught her how to play crazy eights. Eleanor wanted to play too, so the three of us played a game. At one point, Eleanor had to draw lots of cards until she could lay down and it was so cute when she said, "I'm going to lose." I was impressed that she knew that having a lot of cards was not a good thing. Then at the end of the game when I announced that Zoe won, Eleanor used her favorite phrase, "Darn it!". And then went on her merry way.

This afternoon I walked into the living room to discover Eleanor wearing my long, black boots with her black pants hiked up to look like shorts. I told her she looked like Barbie and she could be Barbie for Halloween. That made her smile and she said, "Yeah! I could be Barbie.com!...Nah, I want to be a cat for Halloween." Having her mention Barbie.com made me laugh because that was exactly what I was thinking about when I saw her outfit...she has been playing on Barbie.com too much!

Seeing the backside or bottom half of Kate under or in something has been happening a lot lately. Here she is in her "jailbird outfit" under our bed. 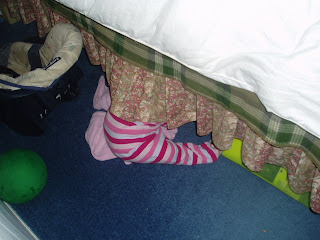 There is so much to explore around here!
Posted by Unknown at 11:57 PM

I love that picture of Kate under the bed!

Awww-cute picture of Kate under the bed. Pedro hasn't done that one yet-but he is starting to stand up like Kate-I've got to get some pictures like you have.

Juan Carlos always takes two pieces of bread as well. let me know how you break him of it!

fussy is always hiding in things now. i can't believe how the time has gone...