Shouldn't we get snow on a snow day?

The day started out like the others during the week. We got up at 6am. Matt got ready for work, Zoe & Emily got ready for school, and I made lunches for Zoe & Emily. Matt, Zoe, and Emily headed out the door at 6:55 and I got Eleanor in the tub for a bath. At about 7:18, Matt called me from his cell phone and said the bus hadn't come yet, so he was wondering if school had been delayed an hour or something. I turned on the computer and checked the local news website to see if anything about our school was posted there. To my surprise, many schools were closed, including ours. It wasn't doing anything outside. I had heard that we might get some freezing rain today, but it never crossed my mind that school would be cancelled. So Zoe & Emily came back inside and Matt headed to work. I had all the kids ready for the day (including 3 baths) by 8am. Pretty impressive I think. I was happy when my Mom called a little later to invite the kids and I over. Getting out of the house sounded delightful and the kids & I looked forward to it. We got a little bit of freezing rain this morning, but most of the day was just cloudy. It was cold this morning, but by this afternoon it was in the mid 30's. I'm sure it is tough on days like today to make the decision about closing school, but I think today was a wasted snow day...a snow day that the kids will be making up in June. It was nice however for the kids to get some unexpected play time with their cousins.

Kate was so cute acting like a big girl at my parents'. She was sitting at the kids' table trying to get a drink out of an empty cup. She would take a drink, put the cup down, and then put her hands on her legs and wait, and then do the whole process over again, and over and over again. 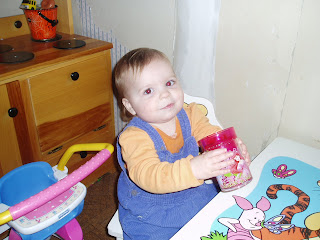 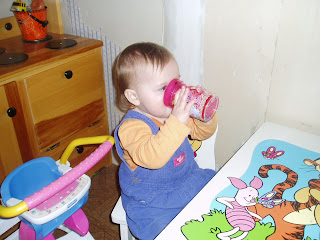 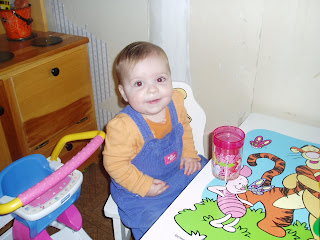 The kids decided to exercise with me this morning. Toward the end of the workout, Emily was wondering (while whining) if we were done yet. I had to remind her that she was choosing to exercise and she could stop whenever she liked.
On Monday, Eleanor exercised with me and when the instructor said, "Okay, now speed it up", Eleanor replied, "Hey! That's what Daddy says...speed it!"

I forgot to post these pictures of Eleanor yesterday. She built a lego house for the Care Bears, which ended up being their castle. 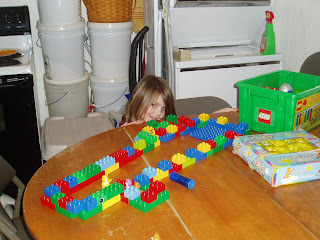 I wanted to get another picture of her because she was barely showing in the first picture, so here she is in her modeling pose. 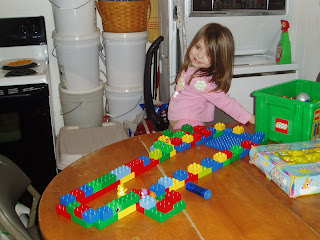 These pictures of Kate and Eleanor are really cute. Eleanor and Vivi remind me a lot of each other. I can see Vivi saying lots of Eleanor's cute things. I can tell they are cousins:)

Eleanor has the model pose, and the model hair! "Speed it!" makes me laugh. I'm glad you at least had fun on the non-snow snow day.

Your kids are so dang cute! LOve little Kate doing the cup thing. Rose just started to snort like a pig, and does this a lot, and at the most inopportune times like during the sacrament at church, and keeps us all cracking up. I agree with you on the snow issue, I would have really been mad about that. They should only cancel school unless absolutely necessary. The kids will all be hating it sitting in hot muggy classroom in June!