Everything is cute today, except the crankiness

Kate discovered a ladybug on the keyboard this morning and was quite amused by it. She kept pointing at it and talking to it. She does the same thing when I'm holding her and she can see out a window. Maybe she'll be our nature girl. 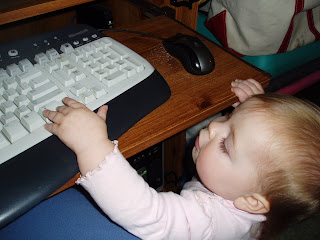 Zach loves to play on the computer. He was playing a game on the Nickjr site today when he couldn't figure something out, so I was trying to figure it out, but wasn't having much luck. When Zach noticed that I needed help as well, he pointed out the help button to the game and clicked on it. Smart boy!

Kate has learned to shake her head no when she doesn't want something. I like it when the kids get old enough to communicate what they want and don't want. But it can be a challenge when they say no to something that isn't an option!
Kate has been super cranky this week and it's probably because she has a cold and she may be getting more teeth because she has been soaking her shirts with drool. If she is awake, then she wants to be held or eating. Somehow I have had a productive week cleaning. Taking advantage of Kate's nap times has helped.

Zoe is discovering that $50 doesn't go far at Lands' End. You can buy 1 or 2 things depending on the price. She is having a hard time deciding what she wants, but she does know she wants something for summer.

Emily made this bunny at school. There is a styrofoam container underneath the cotton balls, so the bunny mouth opens and there is Easter grass inside and an Easter egg. Cute! 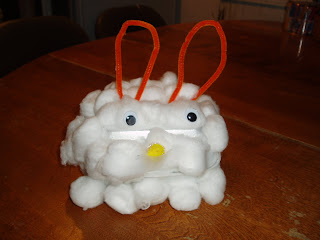 "Taco Bill" received his first gift today from his Aunt Kerri & Uncle Jon. It's funny to see baby boy clothes again. They are so cute! 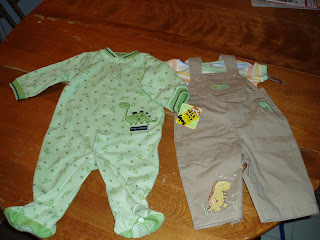 It's also funny to see big boy underwear in the laundry!
Posted by Unknown at 12:03 AM

That is all cute.. except the crankiness. The baby clothes are fun. Thank you for the card for Finn, he was excited! He especially liked that Zach colored him a picture. Have a good weekend!

That is all cute.. except the crankiness. The baby clothes are fun. Thank you for the card for Finn, he was excited! He especially liked that Zach colored him a picture. Have a good weekend!