Yesterday was a fun day off, but I have had one long, tough day today! I'm not sure what was bugging Kate today (teething, cold, or me being gone most of yesterday), but she was CRANKY. She took a short morning nap and then a few hours later she was acting tired again, so I put her down for another nap. Normally she is happy when I put her down for a nap and she looks at a book with her binky and blanket, but she would not settle down for another nap the rest of the day. She wanted me to hold her most of the day, but when I would sit down with her, she would get down to play, but as soon as I would get up to do something productive, she would cry and want to be held again. She finally fell asleep in her high chair watching Zach play on the computer. 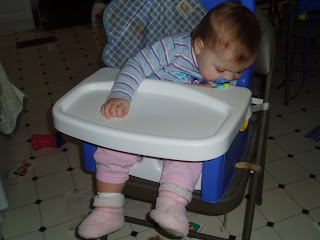 It was a short nap because Zoe & Emily soon arrived home from school and the noise level increased. So by the time we sat down to eat dinner (which wasn't until after 6:30), Kate was exhausted. She ate her slice of pizza and then crashed. 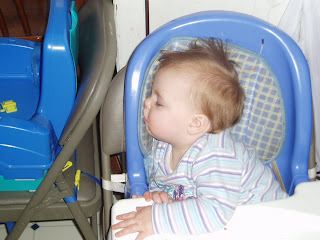 And this is where she remained until the kids were ready for bed and in bed. 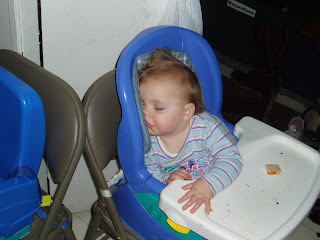 I printed out a numbers worksheet for Eleanor to do this afternoon. I figured she would enjoy doing it because it involved cutting out numbers 1-10 and then gluing them on the matching numbers. She loves to cut and glue! I then tested her number recognition and laid all the numbers out in a random order and asked her to give me numbers in a random order. She had no trouble until I asked for the #8. And then she wasn't sure about the 9 and 6. Then I had her put the numbers back in order again which she had no trouble doing. She was still unsure what the 8 looked like and wasn't sure which way the 6 and 9 went, but she has no trouble counting from 1-10 and she can figure out which number comes next with no trouble..from 1-10 anyway.

I helped Zoe with her homework this afternoon and when we were done, she complimented me by saying, "I'm glad you're smart." That was much sweeter to my ears than hearing her say earlier that I never do any work!
Posted by Unknown at 12:02 AM

The picture of Kate with her face smooshed into the high chair is a classic! That is so cute, and funny. I'm glad you had such a fun day "off" yesterday (it was worth it even despite the aftermath... right?)

This sleeping pictures are way cute! Sometimes as moms we will take that sleep wherever we can get it:)

That numbers exercise would be perfect for Belle, she love to cut and paste too....what a clever mom you are! Poor Kate...isn't it fun when they just want to be held all day?