The Easter bunny came to our house last night! He must be one smart Easter bunny to know that our Sunday mornings are very busy and we leave the house early, so finding Easter treats on Saturday morning instead would be much more relaxing and the kids would have more time to enjoy the hunt and the treats. We had no idea about this, so when the kids woke up they were a bit confused. Zoe kept saying, "But it's not Easter." And I think I remember Emily saying it was weird, but it didn't take them long to get excited about finding Easter baskets and eggs. Will the Easter bunny come again tonight??? I wouldn't count on it.

Kate was the first one up this morning. She loved finding the plastic eggs and shaking them. She wondered what was inside of them, but no one would open them for her. 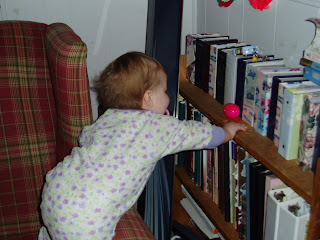 Zach tried hard to open his, to the point where he was shaking from trying so hard. 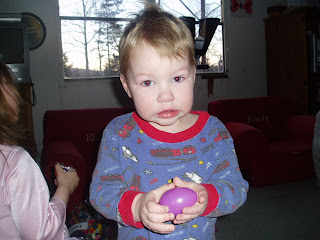 Eleanor had no problem. 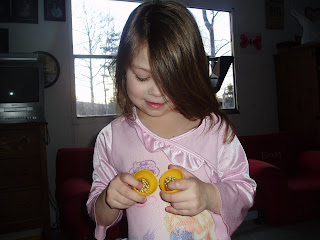 Look at all the eggs Emily found in the kitchen! 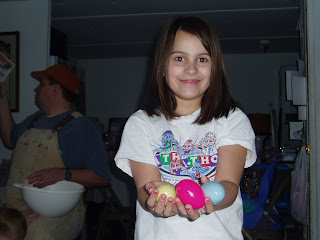 The goodies found in the eggs went into a big bowl to share. Kate REALLY wanted to get into that bowl! 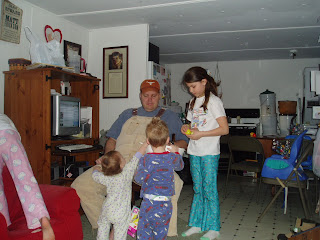 No luck with the bowl, so she moved on to play with the empty eggs. Notice the Easter basket with the typed name..."Does the Easter Bunny know how to type?" asked Zoe. Sure does! 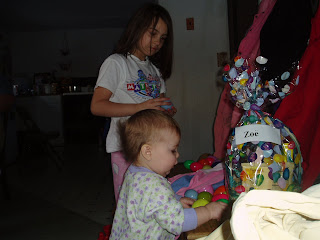 Having time to sit and enjoy a treat would not have happened on Sunday morning! 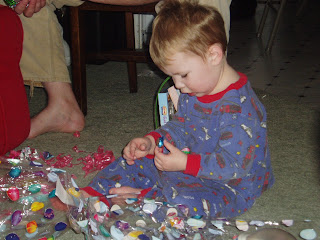 The gang is all here humoring me for a group picture before diving into the candy. 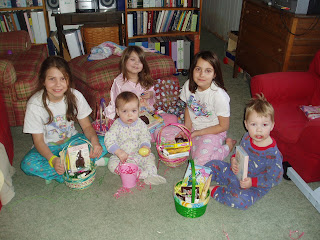 Zach spent most of the day carrying his "green basket" around and playing with the plastic eggs.

Zoe, Emily, Eleanor, Zach, and I made it to the library this morning to give back 2 books that were long overdue and to check out new books. We haven't been to the library since before Christmas! The librarian said it must be Spring because we were out and about. It has been a long winter. The one thing I really miss about not having a car to use during the week is not getting to story time on Wednesday mornings. Zoe was excited to discover that our library has all of the Nancy Drew books. Eleanor had fun picking out Disney books. Emily found easy reading chapter books to enjoy, and Zach sat at the table to look at books for a few minutes and then decided it would be much more fun to run around. And after Eleanor used the bathroom, Zach had to use it too because it was a new toilet to explore! Matt thinks that maybe Zach will become a plumber. I'm glad he doesn't have Emily's fear of public toilets. I wasn't going to check out a book since I have several books here I want to read already, but after looking at the new book pile, I couldn't resist "Getting Rid of Bradley" by Jennifer Crusie. I'll let you know if it was worth the read when I'm done. I'm hoping to read a bit before bed. I am so glad we finally made it to the library today! It was fun to read Eleanor's books to her when we got home because she doesn't sit to be read to very often. I have noticed that we don't read as much when we don't have library books around to read...even though we have 3 shelves full of books in the kids' room!

This day wasn't eventful enough, so we threw in a friend birthday party for Zoe at our local bowling center. Matt stayed home with Zach and Kate. My parents came to the party and they were a big help. This was my first public birthday party for any of my kids, so it was a new experience. And it started off with the guy running the center telling me that I wasn't in the book of reservations...even though I had called last Friday night and talked with a guy who said I was in the book and I didn't need to confirm my reservation, that I just needed to show up today. So I did, and luckily we were able to have our party even though they weren't expecting us. There was another big group before us, so we had to wait a bit before we could bowl. Zoe had 6 friends at her party, plus Emily & Eleanor, and they all had fun bowling together. It was nice having an all girl party because they were all pretty mellow and got along. When the bowling started getting old after about 45 minutes of bowling, we had Zoe open her presents before the pizza was done since we were behind schedule. She enjoyed all of her gifts, but most especially the $25 a friend gave her!, a new Webkinz dog, and some headbands. The pizza was delicious and we ended with Grammie's delicious cake. The party was a big success. Zoe had a great time as did her friends. I would definitely do a bowling party again, although next time I will book the party in person and not overlap another party. But overall it was fun and the clean up was pretty easy. :-) 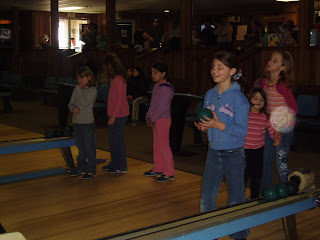 Eleanor bowled one turn and then decided she had had enough. 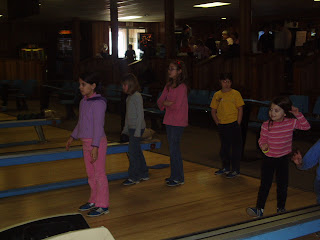 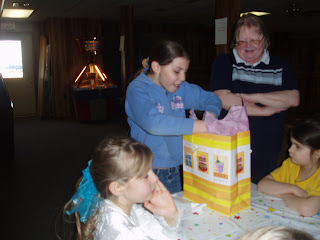 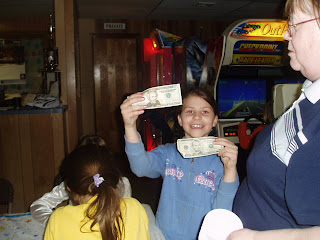 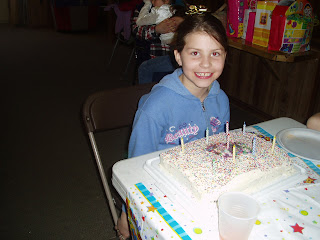 While we were bowling, a few of the girls asked me if they could go play air hockey. I told them they could and then they said, "But we don't have any money" to which I replied, "Neither do I!" They waited until their parents came to pick them up to get money for the game before leaving. 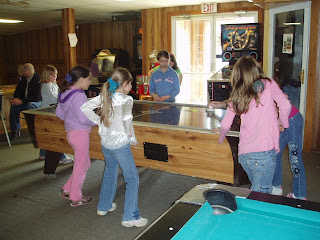 I only had a credit card (bank card) to pay for the party, but the bowling center doesn't take credit cards, so my Dad went home to get his checkbook to pay for the party and then I paid him back. While the girls and I were waiting for my parents to return, Eleanor made a new friend. Here she is (the one kneeling on the left), right at home with people she doesn't know and I don't know. When we left she shouted to her new friend, "I'll see you at my party!" Eleanor, Eleanor, Eleanor. 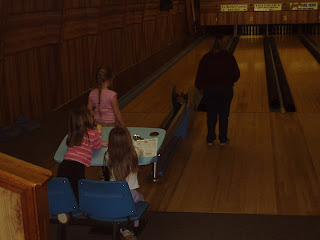 Wow, what a fun day! That Easter Bunny IS smart. I think my favorite picture is Zach trying to open his egg. Thanks for posting all of the fun pictures & news! Happy Easter!

The Easter Bunny had to find us in San Diego. I only have one who cares about the Easter bunny anymore which makes it hard. I am glad you had a happy Easter.

Busy, busy day! What fun to wake up to a great Easter surprise! That bunny is definitely a smart one:) I am glad all worked out with Zoe's party. Looked like a great party too:)