Zoe got up at 5:20 this morning with Matt to get some rowing in before getting ready for school. She did 1000 meters and then 500 meters. She went to bed early last night, so she would be ready to wake up early this morning. She really seems to enjoy rowing...and getting up early on her own to do it is proof! Usually she's trying to get a few more minutes of sleep when I wake her up at 6:00. We'll see if she gets up early tomorrow since it is almost 8:00 and she is working on a Paper Mache project. 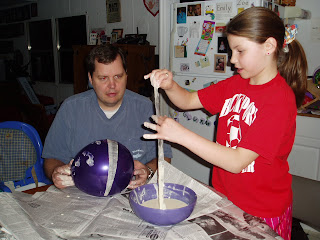 This weekend Zoe claimed that her teacher gave her newspaper to do a fun project if she wanted to and then proceeded to describe Paper Mache. She wanted to do it Saturday afternoon when I was busy doing other things and I told her that we could do it another time...we'll put it on our list of things to do. Then I read an update from her teacher this morning, which was in Zoe's backpack. It explained that the children were expected to do a project relating to the planet they picked to learn about, so this Paper Mache project turned into more than just something fun to do. It needs to be done by Friday. Zoe is making Pluto (which is now not even considered a planet I am learning). Step 1 of the project is now complete...and Matt and I are left to clean up the mess as Zoe heads to bed, wanting to get up early again tomorrow.

Zach was wounded during FHE this evening. During the game of charades when the girls were acting out "reading while dancing"...very badly I might add, Emily knocked Zach down (after knocking him down a second before and saying she was sorry) and he bumped his nose on the floor. It bled a bit, but he is fine.
I just remembered going over our schedule for the week as a family last night and Matt said "Monday is FHE" (Family Home Evening) and then Eleanor claimed that Tuesday was BRI. It was so cute!

Day 1 of potty training has ended. Zach received many stickers for sitting on the potty today. 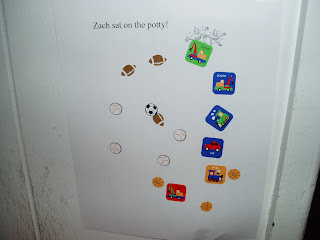 But the day ended with no stickers on the "Zach peed or pooped on the potty chart". 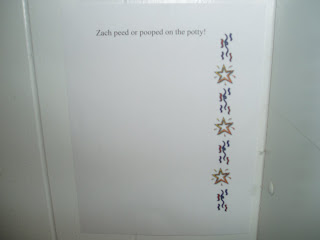 And I am currently washing the different pairs of underwear and pants that he wore today. I am ready to go relax and read and forget about potty training until tomorrow!
Posted by Unknown at 11:40 PM

There is always tomorrow. The paper mache looks fun!

Potty training can be so frustrating, but the end result is soooo wonderful! Good Luck!

You look so cute pregnant (from below)!

Nice rowing machine-that's great exercise. Sometimes I try to get my boys to get on the treadmill just to wear them out. :)

Potty training = yuck. Poor Feisty is having such a hard time - is not doing well at all - those UTIs really did a number on her.

It's a good thing you clarified that "fun thing to do!"