I was flipping through our recent conference edition of the Ensign this morning when I saw familiar faces!  What a surprise! 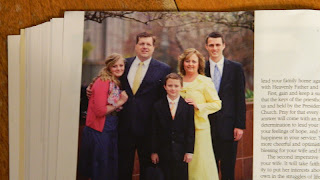 Sarah, Jon (Matt's brother),Sam, Kerri & Jacob (who will be leaving for his mission in just a few weeks!) 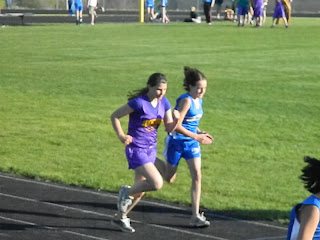 Both my parents and Matt saw Zoe run the 4x100 relay.  Matt drove from work to watch the relay and then he went back to work.  He is a great Dad! 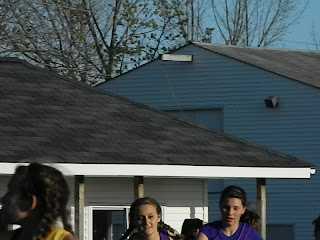 I was a bit distracted as I took the relay picture.  Zach, Kate & Noah had found a dog to love.  The owner let them take the dog for a walk. 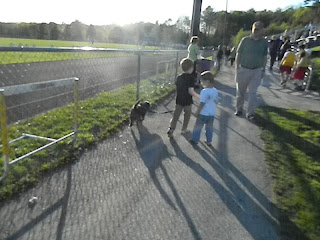 I told them to stay close, which of course they did not do.  After the relay, we walked back to the spot where the owner had been.  I saw the owner, but then she disappeared.  I looked all around, but I couldn't see her anywhere.  Weird.  After awhile, I started to wonder if this owner was really an angel and she had given my kids what they most desire!  I wasn't going to leave with the dog, so I continued to search.  Zoe was waiting for us by the car and Emily & Eleanor would be done their softball practice, which was just across the road (How sweet was that?!), so I wanted to get going.  I was getting annoyed.  Who lets young kids that they don't know take off with their dog and then mysteriously disappear?  I FINALLY spotted the owner up in the bleachers.  She had forgotten about her dog.  I really can't be mad at her because I am very capable of doing the exact same thing. 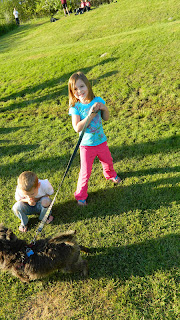 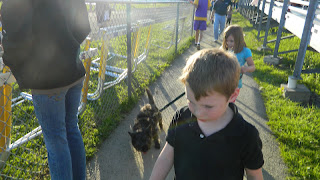 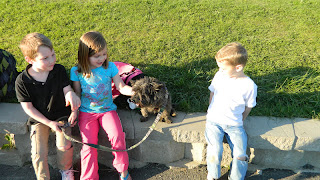 You can't tell from these pictures, but Noah was covered in mud from rolling down a hill that had mud at the bottom!

That is a great picture, isn't it! I love it.

I could totally forget about my dog, too! :) Always embarrassing when someone calls to say they have my runaway dog...that I didn't realize was missing (that has happened several times!)

I'm glad Eleanor had a great birthday! Happy late birthday Eleanor and great job girls on your many athletic endeavors.

I'm also glad you came to peace with the financial thing - good to find out, not just always wonder what it was - also good to not hand over any money! :)

Have a great weekend!!