A morning out with Zach

Most of my morning was going to be spent watching Emily & Zoe at their basketball practices, but a note on the door of the school told us that their practices were cancelled for the day because the coach is sick...a phone call about that would have been nice, but anyway. I was looking forward to watching them since I haven't been to a practice yet and I won't be able to go next Saturday because Matt will be gone again. We came back home and then I headed out with Zach to go to Walmart to get Zach's haircut and to buy him some underwear. I wanted to squeeze this trip to Walmart in today, but I didn't think I was going to be able to, so the cancelled practices gave us the morning to spend some one on one time together, which was nice. Here is Zach before his haircut... 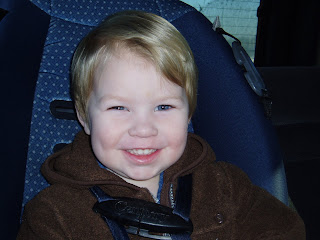 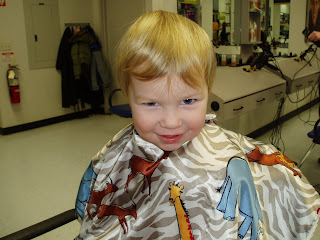 Zach did really well while the stylist used the clippers, but when she turned them off and tried to blow dry the hair off him, he was done. He started to cry and didn't stop until she was completely done cutting the top of his hair and blending in the top with the sides and back. My Mom met us at Walmart and she said that she could hear Zach crying when she walked in. He became a happy boy again when he was done and he happily said goodbye to the sylist and the few other people there. Now that the torture is over, he can enjoy his new look and the sticker he got. 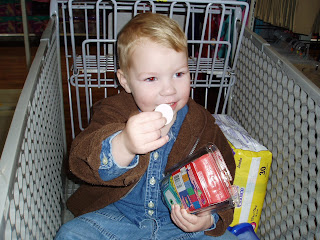 Emily doesn't think that Zach looks like himself anymore. She says it looks like we adopted a new boy to live with us. I personally like Zach's short hair and think he looks handsome. 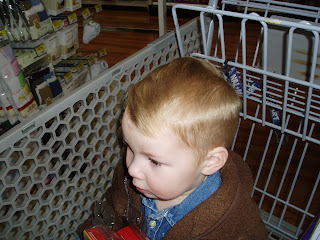 Here he is taking a walk with his underwear. Doesn't he look so big and proud? 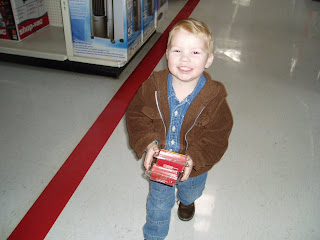 Well, by the end of the shopping trip he was ready to ditch his underwear and would have been happy to never see them again. He traded his underwear for a blue bath pouff and was quite unhappy when I insisted on putting the underwear in the cart, too. I don't think the "If you want to wear your underwear then you need to pee in the potty or else you'll have to wear your diaper" is going to work with Zach.

I hosted an Arbonne party at my Mom's house this afternoon. Zoe, Emily, and Eleanor came with me. My friends Aimee, Mere, Patti, Belle, and my Mom were there. We tried out lots of products, tried a facial (I keep touching the skin on my face because it is so soft!), and had lots of fun...Zoe, Emily, & Eleanor thought it was boring.

I've been spending time this evening getting ready for the Sabbath day tomorrow. It is a new family goal to have everything that can be done on Saturday done, so we don't have to take the time to do it on Sunday morning. We often find ourselves on Sunday morning picking out outfits, ironing, trying to find shoes, and getting the diaper bag ready and we wonder why we can't get out the door at 7:30am when we need to. Since we only have one car, we have all been going in together with Matt who has meetings before church starts. Sunday mornings are much more relaxing and invite the spirit when we do take the time on Saturday to prepare for Sunday, but sometimes I get tired of spending my Saturday evenings ironing and getting things ready, so I rebel...and then our Sunday mornings are hectic and anything BUT relaxing and preparing us for our Sunday meetings. I have already saved us time in the morning by hunting down Zach's shoe this evening, and I was much calmer about it then I would have been in the morning.
Posted by Unknown at 11:56 PM

I love the haircut! Zach looks like a big boy...and underwear? Sounds like a very productive shopping trip. Good luck with all the fun:)

What a handsome boy with his new haircut. :)
Yeah, we're in the process of potty train our 2 1/2 year old and he wants nothing to do with his underwear, even though they have goofy on them.
So, you do Arbonne. A old coworker of mine use to sell Arbonne and I miss buying stuff from her. I'll keep you in mind for the near future.

He does indeed look very handsome!