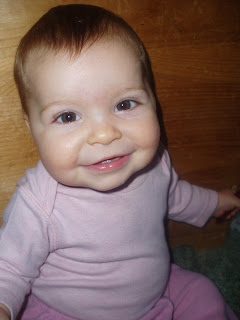 Kate is 11 months old today! This picture was actually taken a few weeks ago when she was healthy. Kate wants to be able to stand up on her own, but she's not quite there yet. She did stand on her own for about 4 seconds this evening. She likes it when we try to get her to take a step, but usually she just leans into the person she is supposed to be walking to.

The kids and I stayed home from church today. Matt should have stayed home too since he is feeling worse than I am, but he was conducting in Sacrament meeting today, so I think he felt obligated to go. When he got home, he could barely talk. The day wasn't as long as I expected. The kids kept themselves busy and Zach and Kate are feeling better so they played and weren't so clingy. Kate woke up cranky from her nap, but I think that's from the top teeth she is getting. I was able to relax quite a bit. We watched some church movies in the morning and then I read from the Ensign (a church magazine) while the kids played. Of course in the middle of movie watching and reading the kids wanted to eat constantly and diapers needed to be changed, but for the most part it was relaxing.

I have been making CDs this afternoon with the 2008 Primary songs on them to give to families with children and our teachers. I found a neat CD label for the front of the CD case at The Idea Door. This has become a favorite site of mine for Primary!

We've decided to give Zoe and Emily two chores to do each day that we will pay them for. One of them will be dishes, but we're not sure on the second chore. Any suggestions? Matt suggested sweeping the kitchen floor, but the girls didn't want to do that...which in the end may not matter and they'll get that chore anyway. Zoe wants the same two chores everyday, but Emily would like a different chore each day besides the dishes. So as of right now, they each have one chore each day that they're going to do and will get paid for until we decide about the second one.

We have a new family goal to read the Book of Mormon together this year from the "real" scriptures. Usually we read from the children's version of the scriptures. Zoe is very excited about this goal and she loved participating in the reading tonight. Zoe and Emily both got new scriptures with a scripture bag and a little Primary songbook for Christmas, so they were excited to get their scriptures out to follow along. Emily couldn't follow along as well and got frustrated, but she sat reverently and listened. One chapter down, many to go!
Posted by Unknown at 10:56 PM

To answer your question - yes, Kristen did the change from her hospital bed with the laptop they were able to supply her with. Thanks!

Holy Moly, that is one cute baby! Hope you all get feeling better soon... must be all that cold snow?? If it makes you feel any better, I have a cold sore, add that to my list. Oh, and in regards the the previous post, yes it is a little "freaky" that you are half way through your pregnancy already. Wow!

I hope everyone is better soon. That sounds like a great family goal!