Zoe & Morgan had fun playing with my camera while we were on the road this weekend. 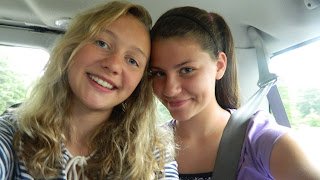 One of the activities yesterday was making blankets for children. Zoe & her friends had a great time working together! 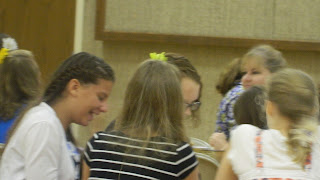 Here are a few of the sweet blankets. 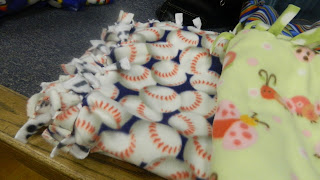 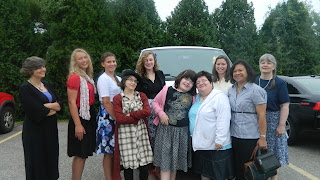 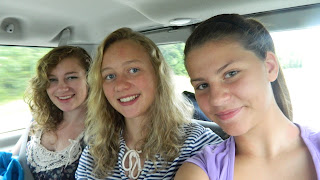 The back seat girls! 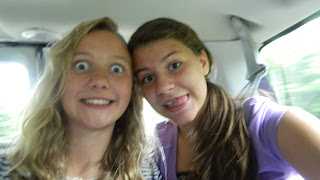 I could listen to Sister Dalton all day long! She truly loves and sees the young women as our Heavenly Father does. She told us that as she was walking into the chapel and down the aisle, the spirit whispered to her that "these are my precious daughters". She told the young women that they may be the only members of the church in their school, but they are not alone. They have the constant companionship of the Holy Ghost. She told them that they are magnificent. They are not average, they are not ordinary. Their actions and choices in the premortal world are why they were reserved to come to earth in these latter days. They are to bear their testimonies of the Savior and the plan of happiness here on earth as they did in the premortal world. She told the young women that Satan will do whatever he can to keep them from the temple. While talking about modesty, Sister Dalton told the young women to live their standards so they will be safe and have the companionship of the Holy Ghost. Virtue (chastity) and purity are most important in these latter-days. She encouraged the young women to take Elder Bednar's challenge to research their Family History and to bring names to the temple. The young women have technological abilities that are amazing and are useful in the work of the Lord. One virtuous young woman led by the spirit can change the world.

Elder Matthew Eyring (son of President Henry B. Eyring) was a great speaker as well. He encouraged the young women to listen to people like their parents. He told them that they can always change. 2 Nephi 9:7. He told them to set their sights high and do not settle for anything less than a temple marriage. He told them to get all the education they can and to stay close to the Lord. He told them their greatest gift that they have is their testimonies. He encouraged them to share it. He said that his parents lived the gospel 100%. I loved the story of President Eyring being in the First Presidency calling his Bishop and asking for permission to administer the sacrament in his home for Elder Eyring and Elder Eyring's son. What a great example of honoring the Priesthood and being humble. Elder Eyring again told the young women to set the bar high for themselves and to not settle. Christ should always be at the center of our focus.

There was a short question/answer period after the talks. We learned that one of Sister Dalton's favorite scriptures is Proverbs 3:5-6 and that her mom & her husband are her heroes. She encouraged the young women to go to college and then go on a mission if they have not found their eternal companion yet. If a worthy young man comes along during college or after who wants to marry her and she wants to marry him, then they should marry. They can always go on a mission together later on in life. :-) Elder Eyring encouraged the young women to reach out to other young women who are lonely. He told them to be the one to break out of their friendship circle to include someone who is lonely, someone who needs a friend.

Zoe now has a personal progress book with Sister Dalton's signature in it. :-) Zoe gave a great testimony today in Sacrament Meeting about her experience at young women's conference. It was the best testimony I have heard her share. She taught by the spirit and it touched my heart. :-)
Posted by Unknown at 10:02 PM