Many papers and art projects came home today!  They are sitting in a pile, waiting to be sorted.

Here is a painting called "Birds" by Emily. 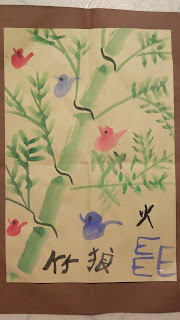 Eleanor had fun in the planetarium that was set up in her gym today.

We had our last pack meeting tonight for the year.  Brother Battaline did a fun scavenger hunt with the scouts!  Then we were going to say a BIG thank you to Anne for all of her work in cub scouts over the years and we were going to thank Rob for being the webelos leader this past year, but they never made it to the activity.  Here is why...


Bangor Daily News
TRENTON, Maine — A small pickup truck struck the propane tank area of an Island Explorer bus late Wednesday afternoon on Route 3, causing police to halt traffic on the busy road, according to a Hancock County sheriff’s deputy.
The buses are powered by propane.
Traffic was not being allowed on or off Mount Desert Island.
Firefighters were trying to make sure the bus’ propane tank did not explode.
The accident occurred near where Route 230 enters Route 3. 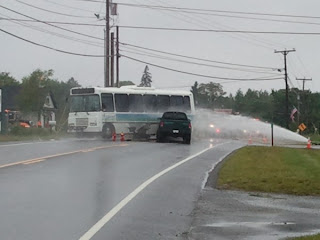 They were stuck on the island, so we ended up having the goodbye party without them.  We did get to say goodbye to the Pavloff family.  They have 3 boys who have been in our scouting program and they are moving next month.  The Boy Scouts were going to have a court of honor after the scavenger hunt, but that didn't happen either.

I just took this picture of Zoe & Noah.  Noah doesn't like to sleep and Zoe is waiting to switch her laundry. 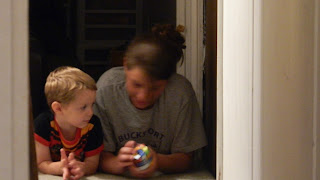 Zoe is quite good at the rubiks cube.