The topic around the dinner table at my parent's home this evening was... What exactly is a dooryard? If you are not from Maine, have never been to Maine, or do not know anyone from Maine, you have probably never heard the term dooryard. From the discussion this evening, it could be either the yard outside the door, or the driveway. It made sense to Zoe that a dooryard is a yard with a door by it.
We know the term was used in the 1830's by Wilford Woodruff from what we read in "In Teachings of Presidents of the church:Wilford Woodruff" He says, "I found the house and the dooryard filled with people."(p.37) It makes sense that he knows the term since he served a mission in Maine and married a woman from Maine. Did he mean the yard or the driveway? or both? Everyone seems to agree that the dooryard is outside, but exactly where outside is still being debated. 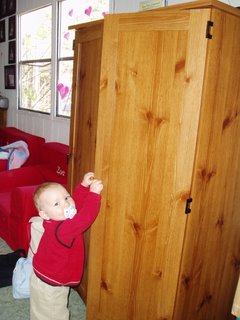 It took bribery, but Matt finally put our new computer armoir together. I told him my mom had bought him something having to do with the movie "Napoleon Dynamite" (which he watches at least once a week), but I wasn't giving it to him until he put the armoir together. He asked me what it is, but I'm no fool, he would have to wait until the job was done. A few hours later...it was finished. He now enjoys his Napoleon Dynamite complete quote book, and I'm enjoying the boards of the armoir being connected instead of scattered around the living room.
Should we start taking bets on how long it will take Zach to break the doors on our new computer armoir?
How about the keyboard shelf?
Posted by Unknown at 8:09 PM