After spending 6 hours in the Emergency Department last night, we were told that Zach has a broken leg...I suspected that when he woke up from his nap in the early afternoon yesterday and he wouldn't stand on his left leg...before I put him down for his nap I heard him cry and when I went to the kitchen to see what was wrong, he was face down on the floor, near the stool. I thought maybe he had bumped his head by the way he was crying, but I didn't feel any bumps, so I walked around with him until he went to sleep...it was naptime, he must be crying because he's tired...he was tired, but after his nap I realized he was in pain as well. After his nap he didn't cry much, he was quite happy, but when he would try to stand up or put pressure on his leg, then he would whine a little and sit down. He did very well in the waiting area at the hospital. We spent most of the time in the children's room so he could play. He was still going strong at 10pm as we waited to be seen. We finally left the waiting area around 10:30pm to go into another room to wait for the doctor. Zach finally crashed as we waited. 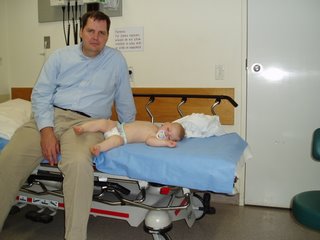 The doctor checked his leg and ordered an x-ray to be taken. Zach, still asleep on the bed, got wheeled into the x-ray room where he slept through his x-ray. He slept through the explanation that he has a todler's fracture and he would be getting a splint there at the hospital, and then he would need to get a cast put on the next day (which was today). It didn't take him long to wake up when the splint was being put on. He cried, and he cried after the splint was on, but after some medicine and realizing we were finally leaving the hospital at 1am, he stopped crying. He slept on the way home and slept through 'til morning. He wasn't able to stand up when he woke up, so that made him mad. I got him situated on my chair, but after a few minutes, he wanted to get down. 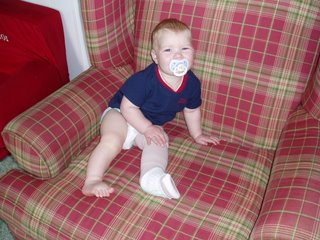 I put in a Blue's clues movie and he was content to sit...for about 5 minutes. 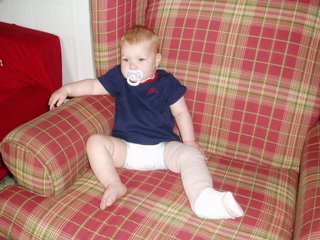 I put him on the floor and he threw up all over the floor and his shirt. My first thought was to stick him in the tub, but then I remembered I couldn't get his leg wet, so I cleaned him up as best as I could. It's hard to deal with things on 4 hours of sleep!

Emily, Eleanor, Zach, and I went to Emily's Kindergarten screening (or screeming as Emily pronounces it) in the morning. She is very excited for school...she wants to make a chain to count down the days! Then we went to get Zach's bright orange, very stylin' cast put on. It was fun trying to fill out paperwork while Zach tried to take my pen away, and Eleanor was running around trying to get Emily to play tag with her...it was time to pull out the cheerios...everyone sit down, eat, and be quiet! I'm glad I brought the cheerios, they really saved my sanity. Zach didn't like his cast being put on, so Emily and I kept distracting him with cheerios.
When we got home, it didn't take Zach long to get down on the floor, crawl around, and play. 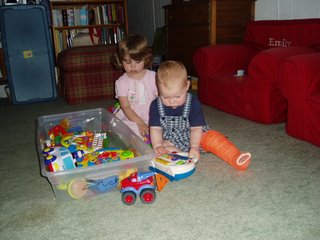 And it took less time than I expected for him to start climbing again...as I found him in this chair. 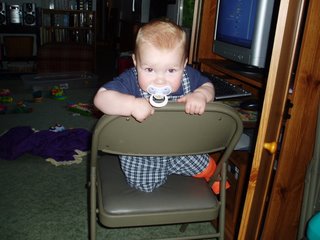 So according to Emily who was the only witness to Zach's fall, he tumbled off our stool. I'm sure that's what happened since the stool was nearby and getting on the stool is one of his favorite things to do. The fracture he has is common, and occurs from falling from a low height, tripping, or twisting the ankle. He goes back to the doctor on July 6th. This is a great way to start our summer...I can either bring Zach to our local pool with the girls and listen to him cry because he can't play in the water or we can avoid the pool until his cast comes off. I could get someone to watch Zach while I take the girls to the pool, we just won't go as much as we originally planned to for awhile. Oh well, you do what ya gotta do.
Posted by Unknown at 9:05 PM

Ahhhh, the poor little guy! And poor you, those rambunctious boys will get ya ever time! Zach's starting you out early!

Poor little guy! I hope he doesn't have to wear the cast for too long! Poor Mommy too!

The first of that story just breaks my heart. Poor guy. The rest of it, well, poor you! Kids or so resilient (already climbing a chair!), sometimes it makes it even harder on Mom. Good luck!