I am sick of feeling sick, and my children have been sick...and I don't think it's over yet. Eleanor woke up from her nap on Wednesday with a fever. She had no energy and she threw up in Zoe's bed when she woke up from another nap later on in the afternoon. She was back to her healthy self again on Friday, but Emily came down with a fever and had a bad headache Friday evening. She slept a lot last evening and today, her throat hurt today, but she seems to be on the mend. This evening Zoe said she felt like she was going to throw up, but she didn't. Then she complained of a headache, so it could be her turn. She's in bed now so we'll see how she feels in the morning. At least with Zoe, she is old enough to know when she is going to throw up and she'll go into the bathroom to do it, whereas Eleanor and Zach will just throw up on the spot...with no warning. I hate that! I hope Zach doesn't catch whatever is going around.

Here's Matt's way of dealing with the sick people around him...ignore them and build motors...no really he has been very patient and helpful. This is his new hobby when the children are asleep. 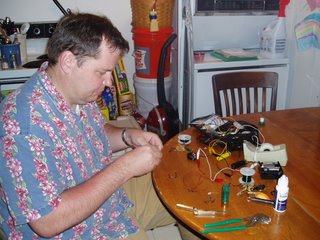